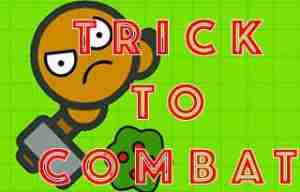 For actual melee combat, distance and timing. Don’t swing your weapon constantly (it slows you down) and attack in between your opponent’s swings. Don’t go into a scrum with less health than your enemy; once you both stay in range swinging it’s pretty much just exchanging damage.

More important, though, is cookies, spikes, and traps. Your hotkeys are right above your movement keys (especially cookie and spike) so USE them. When you’re getting low on health and your opponent is the same or lower than you, disengage. Do it suddenly and tap 1 then LMB quickly and you’ll heal almost instantly, faster than they can react. Don’t pull out the cookie and THEN eat it, do it all as one motion without stopping moving or taking any more fingers than necessary off the WASD keys. If your opponent keeps following you, that’s an excellent time to hit 3 and drop a spike right in front of him, wiping out a huge chunk of his health. Immediately start going towards your own spikes even as you place them – even if they don’t hit at least a little they’ll at least pull away, and you can pull away too if you don’t want to engage.

So yeah, all the basic melee stuff, but get used to placing spikes in front of people, to drawing them into attacking, and to using cookies religiously. I haven’t really used pit traps in combat (I’ve been waiting for the updates with things like NPCs, animals, monsters, bows, etc, to spice the game up as I feel I’ve more or less hit the bottom of the pool already after topping the leaderboard a bunch of time and with max age being so easy), but spikes pretty much give you a guaranteed win over people who don’t use them, or are too slow to react to them. Just like cookies though you can’t take them out then place them (they slow you down and people will react), you must hit 3 then LMB all in one motion so they never see the spike in your hand.

Finally, don’t go into combat without enough resources. This means food for cookies and wood and stone for spikes. I’d have enough for a half dozen cookies at least if you’re planning on maybe fighting a few people (sometimes you run into someone good) and three spikes. You can stop during combat and mine those right back up – even if the enemy chases you you can just keep circling the spike. 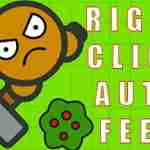